Warning: A non-numeric value encountered in /opt/bitnami/apps/wordpress/htdocs/wp-includes/functions.php on line 64
 Sally Hogshead, the 7 triggers of Fascination and personal branding -

Sally Hogshead, the 7 triggers of Fascination and personal branding 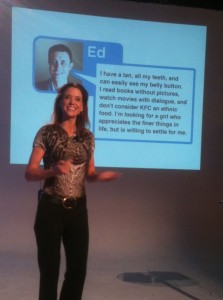 A fascinating event by Bryan Elliott’s LinkedOC at the Gothic Moon Studios in Orange. Great atmosphere, awesome people but no phone coverage, so no life tweets… What?

That gives room for people to actually meet and look each other in the eyes before the event started and have conversations about Sally’s book: “The fashion choice for a book is to find one catchy word, soon all the cool words are gone. Brian Solis his Engage and now Sally’s Fascinate.” said Chapman University’s social media professor Niklas Myhr. And it created room to brainstorm what would be up next if all the words in the English alphabet would be gone.

Bryan’s started the night of with an introduction of LinkedOC. LinkedOC is free for the community. But a community that costs nothing is worth nothing, according to Bryan. You can “pay” your dues by being active for the community. Spread the word with friends.”

“The term social media will fade away in 24-48 months and will be replaced by the term Social Business” – says Bryan Elliott. An interesting observation for sure and we will see if that’s coming true.

Who is Sally Hogshead?

Sally wrote a book on Radical Careering in 2005, her book on personal branding as she calls it. She is married and has 8 kids (wow!). She started working as a copywriter at an advertising agency and started her own agency in Venice Beach, CA when she was 27 years old.

When Sally started she was really fascinated to find out who the good drivers in the audience were; where the smart kids were and who the most attractive people were. Well, according to ourselves. We all overestimated ourselves was Sally’s conclusion after doing research on this, but where we underestimate ourselves is on how fascinating we are. 39% of the people only thinks they are more fascinating than the average person.

Everybody has a moment in their live when you want to stand out and it didn’t happen, and you conclude to pull back, not stand out and play it safe. We can all be fascinating:

1. Your brain is hard wired to FASCINATE

2. Your brain is hardwired to be FASCINATED

What I really enjoyed about Sally’s ideology, is that she is on a hunt to understand fascination from way before the marketing era. Social Media is usually compared to different marketing techniques of the 50s, 80s and the 90s (tv, print and PR). But before the 1920’s that kind of marketing didn’t exist – but people did attract clients, relationships and opportunities and according to Sally that is through fascination.

Fascination comes from one of the oldest words in Latin: Fascinare and it means to bewitch or hold captive so people are powerless to resist. Fascination is an intense emotional focus.

We as humans are far better in fascinating people and captivating our audience then brands do through their marketing.
In fact, while Sally’s book: Fascinate, was originally written for companies and brands, her second edition will be re-written and include concepts related to personal branding and how we can use the triggers to fascinate.

Why do we need to fascinate?

We live in a world where being the best is not enough. If no one knows that you exist, it doesn’t matter. You need to reach out and get the message across that you have something of value to offer, and you do that through fascination. The average attention span is now 9 seconds (thanks to our online life), but long term relationships are not created in 9 seconds and loyalty doesn’t happen in 9 seconds either. You have a 9 second introduction to open the door to connect; that’s the moment you have to fascinate and be fascinating.

“We have outgrown Personal branding”

But I don’t think personal branding is on its way out, she might want to change the phrase personal branding to personality branding, and I am all for it, hence my company name. 🙂 Rather I think personal branding is a work in progress, a sculpture that is never just finished yet, and will never be. As long as we keep peeling layers off of ourselves we discover new ways that enhance or focus our personal brand. Vincent van Gogh wasn’t his first painting – or his last, it’s what he did throughout his whole life why people call him an influential painter.

How can you be fascinating?
How do you immediately captivate someone. Sally created a system of 7 triggers that fascinate. As not everybody will fascinate people in the same way.  I definitely think she is on to something: finding a system that fascinates and fits your personality, instead  of a one-fit-for-all approach.

Here is Sally’s System of 7 triggers:

Lust and Vice were mentioned in her old book, and are now replaced by Passion and Rebellion.

Sally says that we can use this system and apply it to almost anything.

Find out how you can be fascinating

Sally had some great exercises that made her system of triggers come to life. One exercise was to think of a situation in which I want to fascinate. And she came up with numerous ways how you can use different triggers to fascinate for each different goal.

If you ask what fascinates people the most, rebellion is always what wins.

“Remember who you are.”

Fascination is really about remembering who you are.

Now Sally is launching Howtofascinate.com, that take her system of 7 triggers even further. At the LinkedOC event she announced for the first time her matrix of triggers, the 49 personalities that you will get by combining your primary and secondary trigger. Your secondary trigger plays a major role in who you are and makes you 2 dimensional.

She also gave some examples from famous people and their personality type:

If you look at the diagonal of the matrix, they are people that have too much of the same. They are one dimensional.

And then she had a list on the screen with nouns that we could choose to share what we do. What is the actual thing we deliver.

In the end the exercise revealed the following result for me:

I am the Catalyst
My competitive advantage is:
Unique thought leadership
and
Out of the box sales results

The exercise was on to something, but unfortunately it didn’t fully feel me.

This is basically her formula:
My competitive advantage is: 3 adjectives + 3 nouns

At the end of the event we were able to ask several questions and I asked her: “Are you using several triggers simultaneously to fascinate?” And she responded that, Yes indeed, you can use several triggers to fascinate, but you wouldn’t use all of the triggers at the same time. Another great question from the audience was: “How do you decide which trigger you are going to use?” and her answer came down to that it depends on the results you want to achieve.

All in all, it was a great event. Thanks to Bryan Elliott for pulling these great speakers to Orange County. I wouldn’t have wanted to miss this for the world. I do think her 49 personalities matrix can use some fine tuning. But this was not the final version yet and I am looking to see the results of her work in the future on this matrix and on the website howtofascinate.com. Thanks Sally Hogshead for being fascinating!

Sally is updating the current version of the book Fascinate and it will come out in the spring.

41
SHARES
FacebookTwitter
You can leave a response, or trackback from your own site.

8 Responses to “Sally Hogshead, the 7 triggers of Fascination and personal branding”