While roaming around the Internet yesterday, one video really stands out. It is a genius video shared on Twitter. The video takes a new approach to marketing, and works well, as reports show that many places have sold out of the product. The masterminds behind this operation are the marketing department at Nokia. Nokia launched its new smart phone just in time for the holiday season.

What really makes this video interesting is that Nokia takes a growing trend in pop culture and the worlds most advanced 4-D technology and mixes them together in spectacular form. It results in an amazing 4-D lightshow that takes place on the side of the Mill bank Tower in London England.

World Renounced Mega DJ, Deadmau5, takes the stage to spin an epic music set that is created especially for this moment. The Mill Bank tower, which is 120 meters high with over 800 windows acts as the canvas for this never before seen light spectacular right in the heart of London. Thousands of Deadmau5 fans and Londoners watch in awe from across the river as the tower twisted, pulsated and even looked to have crumbled completely down at one point, in a once in a lifetime performance. 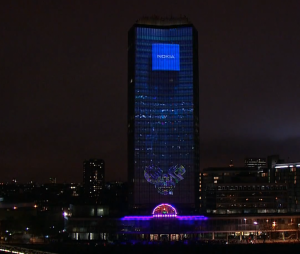 Never before has Nokia taken a product launch to this magnitude. When I first saw the video yesterday, a mere 300,000 views were already listed and I expect millions to follow in the coming days. The new phone that Nokia was marketing for is called the Nokia Lumia 800. According to many reports, the phone is currently sold out completely across Europe. The Nokia Lumia 800 is a new window’s based Smartphone similar to the hundreds of others out there, which helps keep its users connected to the world at electrifying speeds. What makes this campaign so spectacular besides the whole light show was Nokia’s ability to get Deadmau5 on board.

In the past few years there has been an influx of attention to this new style of electric dance music. Deadmau5 has been at the forefront of the industry for years now, which has taken London by storm a few years back and has now starts to claim fans all across the U.S.  There is a huge growing trend here and more brands approach DJ’s to help promote their products and services. Light shows, like this one, are not uncommon at live DJ shows where there are already hundreds of thousands of captured fans just waiting to listen in to anything their favorite DJ’s have to say, even if it is promotions for products.

Check out the Video Below!!

3 Responses to “Deadmau5 and Nokia Take London by Surprise”