Warning: A non-numeric value encountered in /opt/bitnami/apps/wordpress/htdocs/wp-includes/functions.php on line 64
 Are You Crisis-Prepared? - 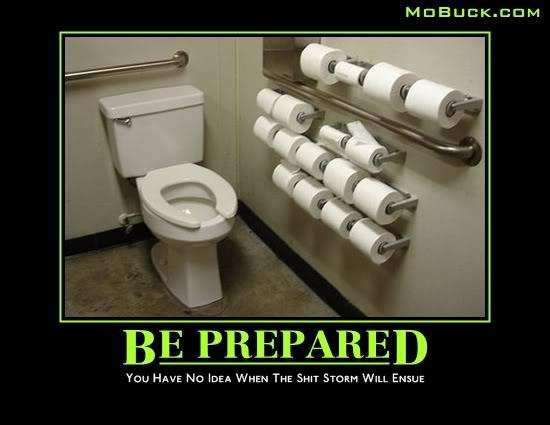 As a PRSA member, I recently got to attend a luncheon focused on crisis communications. This luncheon couldn’t have come at a more fitting time: Right after the Boston Marathon bombings and right when Disneyland had to shut down some of their major attractions. Not that you could compare a Disneyland ride closure to a marathon bombing. But being in Orange County right next to Disneyland, it’s an appropriate topic to talk about when it comes to a crisis, especially when the senior vice president of Disney’s marketing team is on the panel.

And consider what just happened in Bavaria, Germany. They had such devastating flooding, it was even all over the news here in the States. I recently read about BikeSherpa, a company planning bike trips for their customers in that area of Germany. They had just put together a whole Facebook marketing strategy, when the flood hit and they couldn’t implement any of it. So what do you do in these instances?

What constitutes a crisis?
These examples let us conclude that no one has to die for a crisis to occur. Crises are sometimes earth-shaking, but not always. It could be something as complex as a bombing, or as seemingly insignificant as a bad tweet from an employee. A crisis is simply the occurrence of an unexpected event. It doesn’t even have to be a negative event. Sometimes, great things happen… and no one was prepared for the impact.

Best Way To Deal: Be Proactive
The best action to take when it comes to crisis communications is to be proactive. The best way to really deal with a crisis is to catch it before it gets the chance to occur. There are many PR professionals who have specialized in crisis communications and make sure brands have a solid plan in place (and usually have a Plan B and Plan C as well) to avoid crises. It might be a bit costly to be proactive and to make sure your brand is prepared for a possible crisis; however, it would be much more expensive to navigate through and recover from a crisis if it was to occur. Even when crises do occur, because there is no certain way to completely avoid them, it is helpful to have a crisis plan in place, so everyone knows exactly what to do and what not to do.

Picture A Crisis As An Earthquake
Imagine there’s a major earthquake, you’re in Downtown LA and no one told you how to behave in a 50-story glass building. Imagine no one had thought of emergency food for a few thousand employees in the building, of emergency water supplies or an emergency line of communication to the outside world. Imagine a few dozen glass buildings shatter in seconds and you didn’t know where to go or how to protect yourself! When I worked in Downtown LA, the first thing that happened on my first day was a one-hour briefing on how to behave during and after an earthquake. I was told what to bring to work and was given an emergency kit to keep in my desk. I got a tour of where emergency supplies (food, water, first aid) were kept and where emergency bathrooms were. (Yes, they had port-a-potties hidden in the walls!) Talk about a basically-perfect crisis plan!

This is the kind of plan you want in place for your brand. So if that crisis hits your organization, you are prepared. You know what media outlets to turn to to set the record straight. You know your allies, you know your enemies. You make sure your employees are briefed on what to say and what not to say. Who they may and may not speak to in case of any crisis. Make sure there’s a social media plan in place and guidelines employees need to follow (a bad tweet can create just as much havoc as an earthquake!). Make sure you remain transparent while still protecting the integrity of your brand. 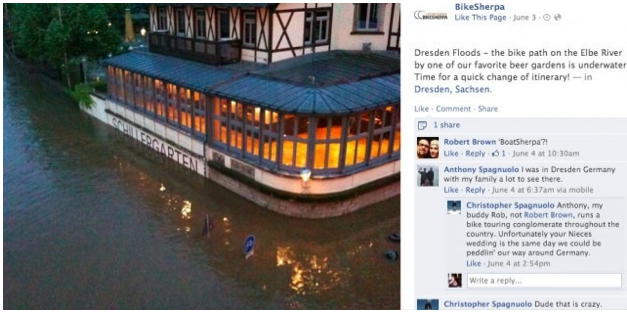 Be Honest And Human
The bike company, BikeSherpa, that I talked about earlier reacted by posting a simple picture of the flood that stated “Time for a quick change of itinerary.” It made them honest – what else where they going to do; and it made them human. It wasn’t a corporate statement, such as “We feel for the victims of this flood and hope that they will recover soon.” It was a human statement, offering a Plan B and actually letting them know that there is a person behind a company Facebook page. It received many positive comments and shares and set the tone for their slightly revised marketing campaign.

A few pointers from the pros:

Have you ever had a crisis? How did you handle it and what was your takeaway?

One Response to “Are You Crisis-Prepared?”